July was a tearful start.

August went with no time to cry.
September was tumble.
October was another tumble.
November we tried to pick up ourselves.
December we’re looking back and blessing for how far we came. 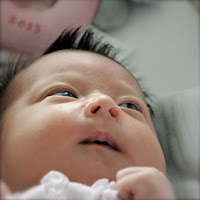 Doctor told us when she was three day old. It was the day I got discharged from the hospital. I could hardly move with pain from emergency cesarean, let alone holding and feeding my baby. Nevertheless it was a huge relief coming home after exhausting three nights of being unable to feed her properly despite frequent midwives advice, feeling completely alone, intimidated and hopeless. At the same time there was numbness all over me, blended with confusion, denial, despair and sadness I have never experienced before.

During my early pregnancy, the fetal test had picked up an abnormality. Later on we were told that our baby has a heart defect, which might require surgery soon after she was born. Although they seemed to be quite confident in fixing this problem as it is not that uncommon, it was obviously difficult for us to accept. Worry and uncertainty carried on but we just hoped that the rest would go well. So when the ‘eye thing’ came up on the top of that, everything seemed to fall down for us. We were devastated.

Both her eyes looked cloudy because of opaqueness on her cornea. She was diagnosed Peter’s Anomaly. This condition can occur randomly to anyone, but it is very rare, something like 2-3 cases in 10,000. How unfortunate. It cannot be cured or corrected by glasses. She will not have normal sight. The only way to give a chance of sight was a cornea transplant, which carries a very high risk for a baby because of the likelihood of rejection. Her eyes were also suffering from high pressure. She immediately started eye drops to reduce this and prevent further damage, which could lose her eye altogether. The more we learn about the condition of her eyes, the more indescribably painful it was. And this was only the beginning of our long journey.

She was soon referred to Manchester Royal Eye Hospital. On our first visit, the consultant explained to us many things; her eye condition, how baby’s eye and brain connection develops, operations, risks and so on. He told us to prepare that it is going to be a long shot with something like 80 appointments a year to come. It was overwhelming. Ironically I work with people with visually impaired and am trained to support them, however, I was far more ignorant. I did not know how the brain connection develops and when it develops. Brain connection for baby’s eyes peak at 8-10 weeks. She was already coming to three weeks. Time was already ticking. If going for a cornea transplant, the risk of rejection for a baby is 50% or more. But without doing anything, she will only have light perception, for the rest of her life she would live in the darkness. We opted for taking this fighting chance to give her best potential.

Hospital visits have been almost every week, sometimes twice a week. It is four hour journey from us. We usually set off 5 or 6am to beat motor way traffic. We often stopped on our way home to feed her and administer medication here and there, which made a single appointment almost all day. She also had other appointments for heart, pediatric, generic, vision support team and you name it. The calendar was full almost every day. In between, I tried to establish breastfeeding routine, which had often gone out of window. Also trying to give her as much visual stimuli as possible to encourage brain development. It was just so busy busy busy. I felt always exhausted. But we just did what we had to do, no other way about it. It must have been hard for a little baby to cope with this madness, too.

Actual cornea transplant took place when she was 11 weeks old. After 5 hours of waiting, she came out of theatre with a patch on her left eye. Weak crying, still fragile from general anesthetic, she could not suck on my breast despite having had nothing for the last 9 hours. I held her with a relief and desperate hope of success. Follow up of the surgery was intense. She had to have six different eye drops all day long to prevent infection, inflammation and mostly rejection of graft. Each time taking those tapes and eye shields off, she cried with eyes tightly shut, shook her head or woke up from her sleep. Yet we had to be very careful not to force open her eye to keep the graft safe. Simple eye drops became a big challenge and disruption. One of her eye drops was to be administered every single hour! We certainly had a sleepless week to start with. That was supposed to tail off gradually but before you know it another major hiccup occurred.

Six days after the surgery, I noticed her behaviour became odd all of sudden. Jerky and irritable. High pitch crying. Breathing shallow. I first thought something was wrong with her heart. Violent sickness and diarrhea in a matter of 10 minutes, her condition worsened. I panicky rang 999. By the time the ambulance arrived, she was already pale and irresponsive very flat. As soon as we arrived at hospital, she was given strong antibiotics. First 48 hour in the hospital, she was moaning and groaning, did not sleep at all. Horrible to watch your daughter in such a pain. All we could do was holding her hands from the side of high dependency bed. I desperately prayed for her recovery. Next day we were told that she had Ecoli septicemia (blood poisoning). My heart sank. Why her? Why she has to go through with one after another? The cause and source were unknown, but because she was immunosuppressant due to the steroid she was taking for her graft, it probably could not fight against. She ended up staying at hospital for 10 days until she slowly slowly got better. Doctor told us we caught her early.
(Dear all mothers: if you do not know the symptoms of this deadly illness, please do be aware this. and never ever wait. call ambulance immediately.)

Since being back home, although she has recovered from the trauma, she had stopped smiling for quite sometimes, which was rather sad. In late October, she had another surgery on her right eye. This time was not a transplant. Instead of taking another risk of losing the right eye whilst left eye hasn’t stablised yet, her pupil was enlarged by cutting her iris partially in order to get as maximum light as possible and for brain to develop. The operation went well, but both eyes will continue to be closely monitored at the hospital regularly and controlled by medication, as rejection could occur anytime. Poor little girl still has to cope with this ongoing madness.

To me, everyday was just about surviving. I used to burst into tears. I used to feel sad watching other mothers smiling at their babies whilst they were looking at their mother’s face. I used to feel that I wish I had a normal motherhood. But all of that somehow has disappeared with time. We have managed to come this far. My daughter is 5 month old now. Both her eyes are doing well so far and the good news is that she has started to see things! Her smiles, coos, gurgle and all of the noises she makes have made me realise I could enjoy my motherhood. She will continue to have a difficult time, develop slower than normal babies, and more operations to come. Nevertheless, our little fighter continues to bring sunshine into our heart and that has never changed since she was born.

Thank you for reading this far. If you can share your experience or advice, please do. Or simply wish us a good 2014! We are really looking forward to it after having such a roller coaster year!

Wishing you all a wonderful Christmas and happy 2014 too! xm
23 comments

smile maker of the week #10

Another surprise arrived for Sabrina that totally made us smile. Her pretty face drawn by Japanese illustrator Yu Shichiji and a beautiful hat knitted by her mum and artist Yoshie Shichiji. Yoshie dyes all her yarns organically and this one is carmine. What a gorgeous colour! Thank you so much both! (click names to view their wonderful work) 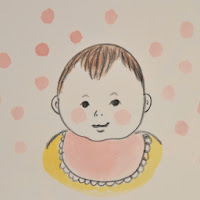 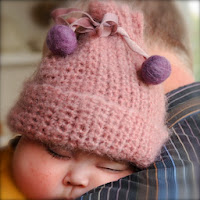 Thank you for your kind messages on the previous post.
Your encouragement made me feel strong. I am ready and shall share with you soon. Hope you can come back. Thanks again. xm
3 comments