Whilst we were in Japan, we had a wonderful opportunity to visit someone I always wanted to visit. Today I would like to share the memory of the trip to Euan Craig pottery studio and his family in Minakami, Gunma.

A master potter Euan Craig is originally from Australia and has been working over 20 years in Mashiko. Mashiko is a well known pottery region in Japan, where Shoji Hamada was based at and became a friend with Bernard Leach. Euan was trained by a Living National Treasure Tatsuzo Shimaoka, who was trained by Shoji Hamada. You may think it is not surprise that he has built a successful career, but what really attracted me wasn’t those great names but his being and sensibility that I deeply felt from his words.

I first found his blog probably soon after I started mine two years ago. I stopped at his for a while as his beautiful wood fired work caught my eyes. Once started to read his words, it drew me in. When Euan writes about work, it is super informative. Accompanying with images of stunning work, he shares so many great techniques, knowledge and skills that he earned over many years. Such a generous artist who does that so openly. Euan often writes about his life and family too, how the nature connects to us, how much he appreciates it and embraces it. The way he writes is always beautiful and calm. At the same time, strong and courageous. His words are like life lessons or reminders of our being that echos in our soul and stays for good. His wife, Mika also writes Japanese version, which I ultimately familiarise more easily. I soon became an online admirer.
Since Japan’s great earthquake last year, their life took a huge turn. Not just trying to rebuild his broken kiln and family home in Mashiko, facing unknown fear of radiation from Fukushima nuclear power plant. With children of 4, the Craig family decide to move away from the long nested town Mashiko and started a new life in Minakami, Gunma. Starting out from almost a zero based on Mika’s late uncle’s house, a massive old silk farm in a dilapidated state. One by one. Day after day. Working non stop before winter arrives. Withholding uncertainty of future, they only hoped for family’s safety. I read many episodes on his blog as they went through, and felt sometimes overwhelmed by their strong family bond beyond such a hardship in life.

Just before we set off to Japan, I read Euan has finally restarted his business, after rebuilding his kiln to a stronger structure to stablise from earthquake and all his firing materials are proved to be safe from radiation. It was a good timing. We wanted to congratulate his fantastic start. The craig family’s house stands within a beautiful country side, surrounded by mountains and fresh air. He and his family welcomed us with a great hospitality.

Euan kindly showed us around the house, studio and fantastic kiln he designed and built. Watching him throwing on a kick wheel that used to belong to Shoji Hamanda Pottery studio and given from his grandson Tomoo Hamada, hearing about his techniques and ideas behind the decorations. What a fortunate and soothing sensation it was. In upstairs, a number of his thrown pots were waiting for firing. “These are about a day work” he says, pointing at huge numbers of perfectly thrown and decorated pots. Wow. Beautiful light coming through the window twinkles the texture of kanna on the bowls. I take a deep breath with admiration.

Among such a dream-like scene, Euan says calmly but surely “I want to live life in a simple way. As much ecological as possible.” There are still lots to do with the house and studio, but he looks back and appreciates happiness of how much they came. “We could not have come this far without all our friends’ support.” His sensibility is so pure and his attitude is so humble. Something I have imagined from his writing, and there he was, such a down to earth and honest man who can simply embrace the life.

Watching their children running around in the garden, I could tell the great comfort in this family home. They must have had a tough and anxious time to get here, too. Mika recalls the journey saying “Many people supported us in a lots of ways. Just kind words when going through hard time helped us keep going.” Must be such a relief for a mother to see children’s smile. 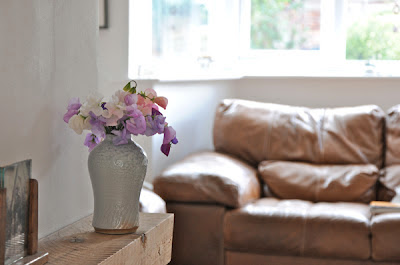 We have brought back two pieces of his work. One, in particular I love, is this vase. It has a tiny dent on the base, which you wouldn’t notice it if you weren’t told. It survived from the earthquake he said. The little mark of the day we will never forget. I felt as if it was a destiny to survive and to encounter a new life. As if it is a reminder of our nature, beautiful yet harsh, and most importantly an appreciation of our life. Every time I see this vase, I feel like a little bit of purity was shared with a great honour.

Thank you so much, Euan san, Mika san and family. xm

You can enjoy his beautiful work and stories here.