(Information only. This post is updated on 12th May 2011, following the completion of the project.) 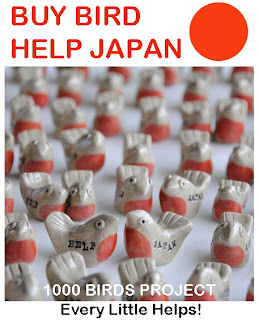 What is it?
This project was set up by Makiko Hastings, Japanese ceramicist who currently lives in North Yorkshire, U.K. , aiming to raise money to help Japan for their recovery from the devastating Earthquake and Tsunami on 11th March 2011. Makiko has family and friends in Japan, where many others are affected by the Earthquake. As you can imagine, Japan’s recovery will take a long time, it can be decades for people to get back their lives. They need help more than ever. Makiko believes every little helps and can make a difference, which lead her to the idea of selling1000 handmade ceramic birds. All sales of the birds went to Japan Earthquake appeal.
Why 1000 birds?
The idea was influenced by the Japanese story of 1000 paper cranes. Please click here for the information. 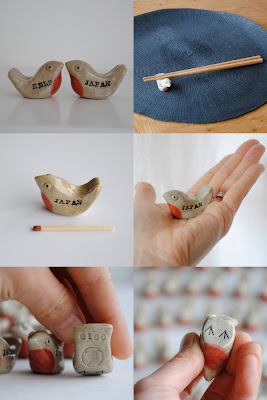 (click to view larger images)
The original design of bird came from her work, bird and building box, which she has been making since 2009. Each bird is handmade and individually decorated by Makiko from her home studio. The birds on this project have no wings, instead ‘HELP JAPAN’ logo were embossed on its body, which emphasising the wish that with YOUR HELP they can hopefully fly for their life once again. Red chest is a symbol of Japan. Individual birds are numbered from 0001 to 1000. Makiko’s signature is embossed on the tail. Birds are small enough to hold in your palm, in a shape of a chopstick rest. You can also keep it as a lucky charm, which is a tradition in Japan. (e.g. to wish for your child’s growth and good health)
A short documentary film of making birds can be seen here.

Who and how helped on this project?
The project was opened to the public via this blog SHIN SHIN, so anyone who could access to the blog could offer help. The method of order was used Email and pay pal payment system.
Makiko received 176 online orders in total from all round the world, including the U.K., Northern Ireland, U.S.A., Canada, New Zealand, Australia, the Netherlands, Italy, Germany, Switzerland, Austria, Belgium, Norway, Denmark, Slovenia, Israel, South Africa, Singapore, Malaysia and affected county Japan. Birds were carefully and individually wrapped by Makiko along with her hand written message to the participants and posted by Royal Mail.
For online orders, 730 birds in total have flown to the new homes. The rest of 270 birds were by direct purchase from Makiko’s studio and the local event on the 23rd April.
How much was it?
The bird was sold £3.50 each with additional charge of P&P. Extra donation was voluntary.
How long this project lasted?
The project opened to the public on the 27th March. It was originally set up as an on-going project to help Japan long term, until the sales reach 1000 birds. Due to the huge response from all round the world, the project completed on 30th April when received all payment toward the bird order.
Makiko thanks to all people who spread the word through their blogs and social network sites, which resulted this project so successful.

How much did the project raise?
Total donation on the project was £3975. Donation from HELP JAPAN HANDMADE ART SALE was added on to this, and we have raised £4933.20 in total.
Where did money go?
All donation was sent to Japanese Red Cross via the Japanese Embassy. This has been forwarded to the Donation Allocation Committees of the relevant local governments in the affected areas to be dispensed to the people affected by this disaster.
What else could we do now?
Your thoughts and prayers for people in Japan would be great support for their on-going recovery. If you would like to continue any donation, you can visit Japanese red cross site, which currently accepts donation until September 2011.
Thank you so much for your support on this project.
© makikohastings all copyright reserved