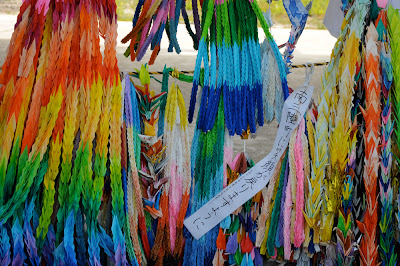 It’s been so hectic since we back from Japan. Much waited … but finally it is the time to share the result of HELP JAPAN PROJECT 2. I would also like to share the story of Minamisanriku Cho, the town we donated to. (click images to enlange)

Thank you so so so much
for people who have contributed to and supported this fundraising project. This time round was rather harder, I must admit. When the news has disappeared from the screen, it is difficult to get people’s attention. As if people assume that the things were all back to normal, this may be a reality of the world we live. Nevertheless, we have managed to raise a total of 417,000 Japanese Yen (approx. £3600). Thank you so much! The donation was delivered directly to the town mayer in Minamisanriku Cho in August.
We stayed at Minamisanriku-Cho for two nights and joined the volunteer group for one day. On our arrival, we headed to the town hall (emergency relief centre), all that was left was a damaged steel structure. I read about the story of the lady who lost her life but raised her voice till last minutes to help the residents to evacuate, and also the survival story of the town mayer on the roof top whilst many lost their life in front of his eyes. I prayed for those who lost their lives. Looking up from the bottom of this building of three storey, you really cannot imagine the tsunami was that high. Really high. 13 metre or more. Who could possibly have guessed this would happen?
The town appeared to be not much different from what I saw last September (you can view here), although there were more electric lines and accessible roads than it was before, and the town hospital was now demolished. You can still see the mountain of cars, broken flood defenses and tons of debris piled up in the distance. Sea water from tide was left on the ground since the land sunk after the earthquake. 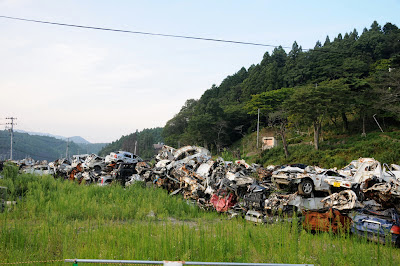 Where is the sign of recovery? It is an irony to feel this huge gap between the life of people in Tokyo today, or anywhere that was not touched by the tsunami for that matter (except Fukushima of course), as if nothing had happened. The real view of this town strikes my heart so much. Hard to explain in words. Hard to bear this devastation. You really have to see this for yourself.

But then you see people in the town. Farmers working in the fields in the early morning, to crop their vegetables. Fishermen and builders rebuilding the ship deck area. A school girl working in the convenient store, temporarily built in the middle of nowhere. An old lady accessing the new hospital near the current town hall. They all living today, for today. Small changes are happening. We must acknowledge this. I thanked the girl in the convenient store and headed to the inn we booked.

I found this inn, Shitamichi-so, via Minamisanirku-Cho’s blog link. The tsunami took this inn, too, completely. (you can view it here) Must have been such a tough decision making period, for anyone who lost ‘main theme’ to their business. The land was ‘it’ and it has completely changed. Would people ever come to this land? But they have decided to rebuild it in the town and opened the new inn on the high land this February. I was simply overwhelmed by their strength and belief. The belief in this towns beauty. The belief in this towns spirit. A city girl like me would not easily comprehend. I take my hat off to their heart.
Shitamichi-so provides fresh sea food from the morning sea by the fisherman son of the house, serving with home grown vegetables and local rice. Soothing sea breeze from the window whilst viewing the sea eases the soften skin after a hot bath. The moment that you feel the most appreciated. There is so much to learn from these people.


Next day 8:30 am. My husband, his son and I joined the local volunteer group. We were 130 all together from North and South. Some were repeaters and some were on a group trip for a week or so. The task of the day was to divide the debris in one particular area, which was at the far end of the town. In general, the news is that there is no more debris, it is now all sorted and moving onto the local business support. It does not seem to be that case here. Minamisanriku appears to be much behind other towns. The 130 of us continued to tackle buried debris of all sort, broken concrete, glass, ceramics, toys, shoes, you name it. These need to be divided first, otherwise the authorities won’t collect them, even if they have space to collect them. (This is another huge problem in Japan at the moment, as there is no means to clear this amount of debris in a short space of time, it is said to take 10 years)
Working under 38˚C heat and humidity is hard. The organiser gave us frequent break time. I have never seen 2 litre of water gone so quickly. The volunteers weren’t allowed to take photos while working, a mark of respect. There were farmers working alongside the empty land we cleaned. They must be living in the temporary housing near the field.
3pm. We ended the work. Relief and fatigue mounted. At the same time, another mountain of divided debris been produced. One day passed. Another day to clean this land. One step closer to the recovery. 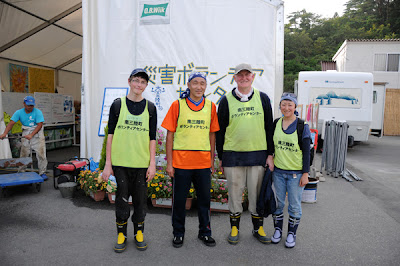 On our way back to the inn, I noticed many pink thin flags tied with bamboo sticks here and there. I remembered I read somewhere that the red flags were marked where the dead body was found. A year and half has passed since the earthquake. I could only wish that what we did was meaningful to those people and future of this town.

Prior to visiting the town, I prepared some photograph banners. These were taken from the children’s workshop "A Bird in the Hands" at POTFEST in the Pens. Over 200 images and messages were gathered and I put them together in English and Japanese to be able to show school children in Minamisanriku. We wanted to send our thoughts to the children, next generation of this town. 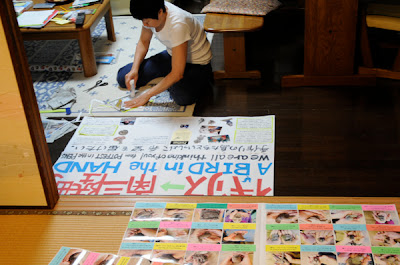 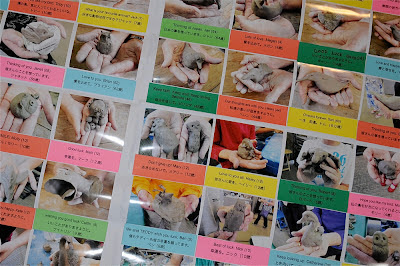 The school was on summer holiday, so I asked the head of education in the town to pass the message on to primary schools. Minamisanriku Cho has three primary schools and I visited one of them, Sizugawa primary school, which was joined with Tokura primary school that was destroyed by tsunami. Luckily I managed to meet the deputy head of the school and explained my intention of this banner. He kindly explained the situation of the school pupil briefly. Most of them living in the temporary housing, some in the next town, commuting by school bus for 50 minutes or so. I cannot imagine 6-7 year old kids does that everyday, but I guess it is nicer for them to be with their old friends. I gave him a small batch of my HELP JAPAN birds that I had, to hand them to their younger pupils when the school restarts. 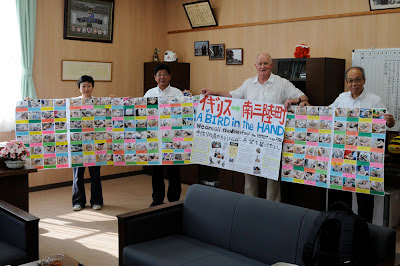 The night before we left the town, we just managed to briefly visit the town festival. Newly set market area next to the destroyed concrete building. Many local businesses have reopened there. The festival was filled with locals and visitors. Children’s laughter echos among the fair stalls. Beside the line of lit fire stand (kagaribi), drum band attracts kids and adults. Fireworks displays in the sky. Everyone watching with smiles and recalling the summer they know once more. 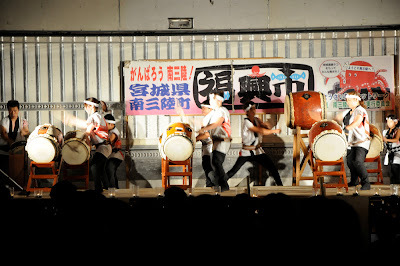 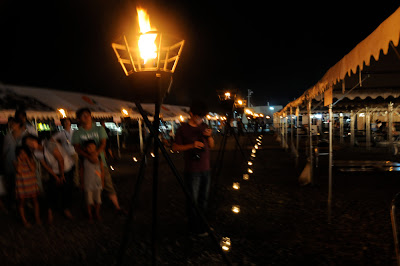 Every Little Helps. What I believe is hopefully somethings you can do too. There are so many ways to help the town like Minamisanriku-Cho directly and indirectly. By visiting (Seeing is believing!), by joining volunteering, by purchasing local products, by ackowledging and by spreading the word (more people knows, better result it gets!)… or maybe more!

I have some stock of HELP JAPAN Birds and Light of Hope candle holders. They are back on online sales while the stock lasts and the donation will be sent to the town again. If you are interested in, you can see how to order here. Or simply email me at makikohastings@gmail.com

Thank you for reading this. xm