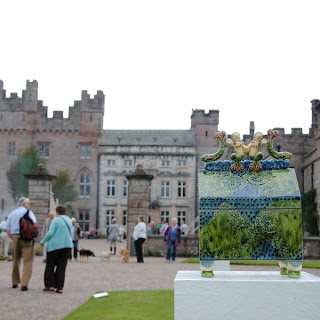 How was your weekend? We had a very busy weekend, visiting three art events. They were all inspirational and I thoroughly enjoyed. As I am still recovering from the excitement and a long drive, (yes, age...) I would like to share the information here by dividing them into three posts from today.

Starting from POTFEST in the Park. This is another annual ceramic festival I like visiting as nearer to where I live (still three hour drive though). It’s held in Cumbria, you know where it’s famous with the Lake district, at the place called Hutton-in-the-Forest. It was great as usual, so much joy to see many ceramic artists from all over the country, including Germany, France, Japan and USA. There were some artists who I’ve already mentioned before in this post, such as Chiu-I Wu, Virginia Graham, Christy Keeney and Craig Underhill. You never get board of seeing their work. As great as always. Although some of the artists who I expected to see weren’t there this year, I managed to speak to many artists, including those who I have never seen before. It is truly exciting talking to artists and getting their insight. Here I would like to share those who inspired me.

Alison Ogden
She is the local to this event. Makes beautiful porcelain pieces combined with her charming drawings and pressed images. I have her cup and jug at home (you can see them in here), since I was completely drawn into at last year’s show. This year, she seemed to expand more colours and matt texture. I loved every pieces but especially I could not take my eyes off this one. This hand-shaped daisy patterned mug was so tiny that can pop on to a baby’s palm!

Kathrin Najorka
German ceramicist. She does wood fire domestic pieces, beautiful thrown and altered the shape. Unlike normal wood-fired work, she adds quirky lines and doodling using ceramic crayons. I love the sense of playfulness within her quality and simplicity. 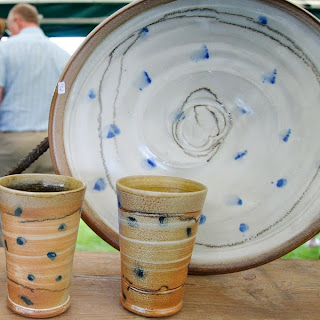 Paul Young
As you can see the first photo, his work are so adorable. Alongside his skillful thrown earthenware pieces, he also makes themed sculpture. Often appears with comical human, birds, sheep and mermaid! Such a joy to see.

Philomena Prestsell
Ireland born Scotland based ceramicist. She was surprised with me showing the interest in her work, saying “Not many Japanese people stops for my work.” I presume they tend to prefer simpler or traditional form than rather spontaneous, colourful, playful piece of work like hers. To me that was what caught my eyes. I love how she transformed the slab of clay into such a free forms with colours, patterns, drawings and transfers. Almost like making a collage on clay. 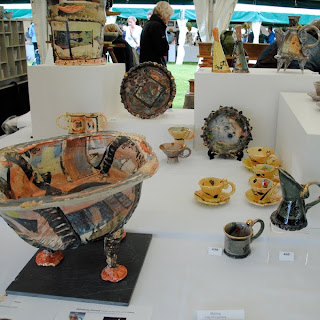 Stefan Bang
Another German maker I love. His beautiful thrown & salt-glazed ware are great to have at home. I bought a teapot last year that I had fallen in love with the cute body shape and the base. (You can see in here) He makes lovely bottles too and sell with tasty fruits schnapps made by his neighbour! This year, I got this simple yet stunning large dish. I am thinking of using as a fruits bowl. 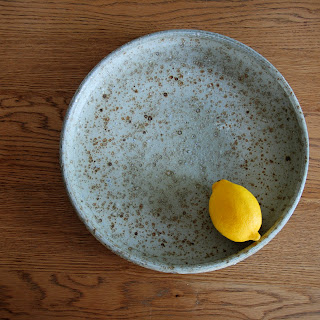 Peter Fullop
Ireland based artist who once featured as a “samurai potter” in a magazine. He had some years spent in Japanese traditional pottery regions and was very excited to tell me about the experience. Although I could see a hint of Japanese pottery in what he makes, it shows his own spontaneous, energetic and dynamic style which was oppose to the tradition. I bought these two sake cups, which base were hand-turned. He asked, do you think they are too big for sake? I said, well probably but probably not for a big drinker. A handsome smile appeared under his beard. I personally don’t drink sake but certainly will enjoy some other favourite in this cup, like lemonchello, sho-chu and peach schnapps in a Bang bottle... mmm 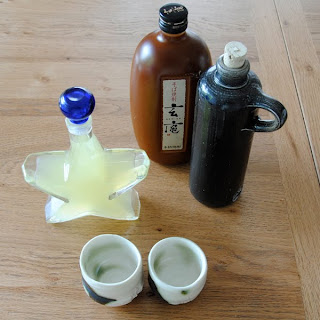 Finally, a showcase of the day, “Homage to the Shrine of the Flight” by Christine Hester Smith. POTFEST has a themed competition among the exhibited potters each year. This years theme was “shrines, Alters & Markers”. This piece was awarded by both visitors and makers. Look at those penguins going toward the foot of bird shaped shrine gate. 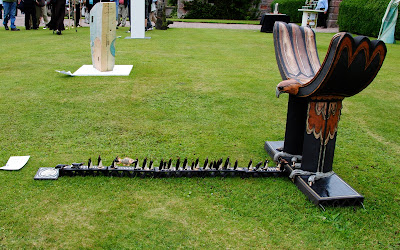